Our summer continues to be full of epic adventures. Independence Day last week was one of the best I have had in a few years. We made plans to hike Mt. Timpanogos, which is characterized as one of the most popular hikes in Utah, and we expected to be part of a huge crowd hiking up to the summit. Before that happened, we woke up to loud thunder at 3am. Our neighborhood was experiencing a lightning storm. Sleepy but excited, Hope and I made our way to the living room where we opened the blinds to watch the black sky light up with frequent shots of lightning and thunder. Consequently, the awesome lightning show we saw would lead to a late start for our hike.

We left the trailhead at 9:20am. Surprisingly there were still parking spots at the Timpanooke trailhead. Despite my cautions against it, Hope decided to wear her Vibram FiveFingers, and I allowed it, knowing that her feet get hot in her hiking shoes. We enjoyed a beautiful, seven-mile hike to the summit. The trail gradually climbed to 11,749 feet, but Hope and I managed it well, our only casualty being Hope’s little toe when she stubbed it while walking. To my pleasant surprise, we did not see more than thirty people while hiking. There were no lines anywhere, not even from the saddle where the two trails meet, and from there to the little shack on top. There were small pockets of people along the trail, but nothing like I experienced a few years ago when I hiked it. We made it to the summit in four hours.

I really wanted to slide down the glacier on the other side of the summit, which would have brought us down to the basin quicker saving us about one hour, but it was steeper than last time and I had a bad feeling about it, so we made our way back down the same ridge we came up. By the time we got back to the saddle junction where the two trails meet, Hope’s feet had become tenderized and her toe was aching. Once we finally got off the scree and reached dirt, I offered to carry her. For the next five hours, we would alternate between me giving her piggy back rides and her walking. I may be bragging, but I feel I earned the best husband award on that hike. It took us nine hours total to hike Mt. Timpanogos.

Our celebration of the Fourth of July continued with a victory pizza from Papa Murphy’s. After dinner we watched the fireworks from a park overlooking the city. It was amazing to see the whole city light up with individual fireworks and even more amazing to watch the official firework shows from different areas of the valley. I went to bed that night feeling free from the stresses of the past few summers where I worked too much for not so much. I went to bed proud to be an American. 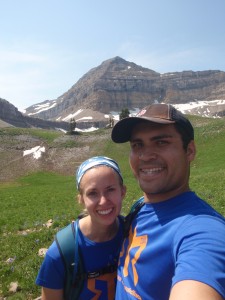