Besides having an awesome wife who spoiled me for the past two days, (and really for the past 17 months), waking up and seeing about an inch of snow on the ground was the first best birthday present I received this year. In comparison with last month’s weather it was a miracle. We decided that we better not waste it, so we went snowboarding at Solitude. Hope made me some delicious scrambled eggs and waffles that had too much chocolate chips in them, not that I was complaining.

Because of the lack of snow recently, even this small layer caused me to dance in gratitude for a prayer answered.

We loaded up our car, Zooey, for adventure. Hope had an ‘amazing’ rental from the University’s ORP.

There were roughly two inches of fresh snow that did not completely offset the rough, icy snow, but we had fun nonetheless, and Hope is improving her snowboarding skills, despite having a sore body from all the falls.

I had another birthday surprise I was not expecting. We returned home, took showers and proceeded to finish making dinner. Hope received a text she claimed came from her friend Kara. Hope chuckled saying that her friend was ‘complaining about a teacher’. I thought that odd during Christmas Break and just shrugged my shoulders. Hope then suggested we light electric sparklers in the church parking lot next door; my slow brain began to do the math. I was convinced that there was at least one person waiting to surprise me, but I did not know who. I had a list of suspects but was utterly surprised when I saw the truck of my good friend from my freshman days at Utah State University, Jeff, and his wife Jess. I screamed like a girl at a Backstreet Boys concert and gave Jeff a big hug. I was never more excited to see them, and it made my birthday. 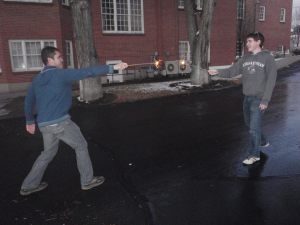 Yes, we acted out a Harry Potter wizard battle.

Yes, I am wearing not one, but two birthday cones on my head. 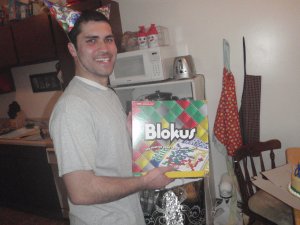 For my first day of being a 26-year-old, I never felt so young J